Home About
Dim Crimson is a female fronted metal band from Enschede, the Netherlands, excisting of five members. The music is an arrangement of melodic and technical guitars and solid drums. The vocals are pure and delicate, classical grounded and have a wide range in both chest and head voice.
The band originated in 2014. Founded by Jeroen Terpstra, Bart Terpstra and Tamara Bouwhuis, who shared their passion for the metal and rock scene. They found a bassist and a drummer and ever since the five dedicated members put their heart and soul in their own written music and work hard perfecting and renewing it.

In the end of 2016 they recorded their first demo ‘Lost’ in their own studio together with their former bass player Patrick van den Brink. He recorded all of the parts and helped in the mixing process shortly before his departure.

After being well received by the audience the band has decided that it is time for a first release. This is what they will focus on in 2019 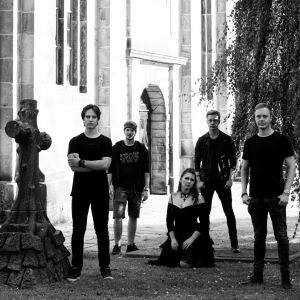